Leghorns originated in Italy prior to 1815 and first arrived in North America in 1828 where they were initially known as Italians. Most of the color varieties of Leghorns were developed in Great Britain, America and Denmark. Brown Leghorn chicks are brown with two light brown streaks down the back. They have single combs and clean, yellow legs and feet. Adult males have an orange-red head, with hackles that shade to orange-yellow at the shoulder. The front neck, main tail, breast, body and lower back is black. The back, saddle and wingbows are orange red with dull black primaries and secondaries. Adult females have a deep orange head and a light orange neck with black stripes down the middle of each feather. The front of the neck and breast are salmon. The wing fronts, bows, coverts, back and tail coverts are dark brown tipped with light brown. The tail, wing primaries and wing secondaries are brown.

Date(s) Available:
Not available at this time. 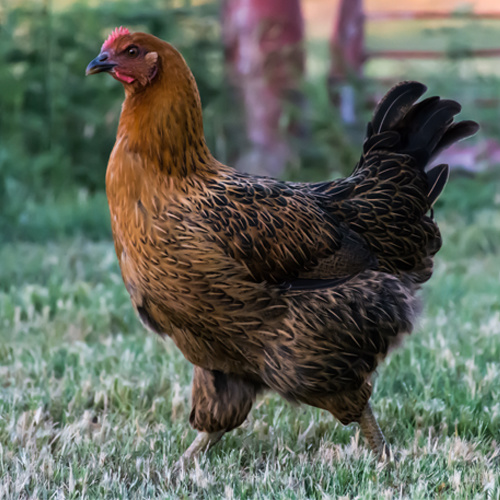